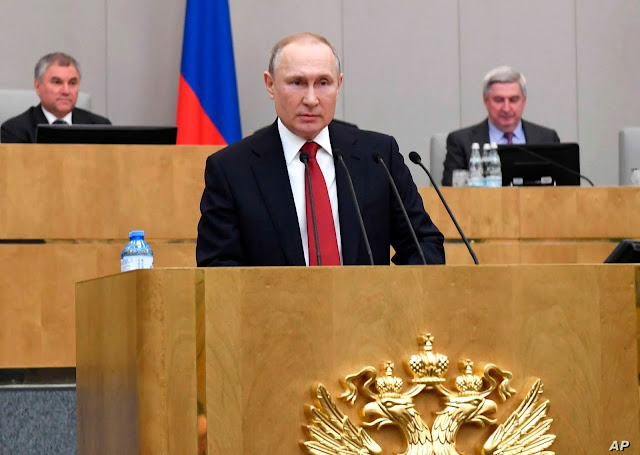 Russian Duma and the Constitutional Court approved the constitutional amendment by President Vladimir Putin last March (“Russian Lawmakers Adopt Putin’s Sweeping Constitutional Amendments”; Moscow Times; March 11, 2020 and “Russia's constitutional court clears proposal to let Putin stay in power beyond term limits”; ABC News; 17 March, 2020). Much attention was drawn to Putin’s presidential term and his status after the amendment. However, I would like to mention furthermore, which is the impact of this amendment on Russian foreign policy. Putin’s nationalist diplomacy is closely intertwined with his domestic traditionalism of tandem rule with the Russian Orthodox Church. I would like to explore how will Putin advance Russian presence in the world through this amendment.

To begin with, I would like to mention ideological resonance with the Western far right. Through the experience of post-Soviet confusion, Putin had become highly alert to socio-cultural and geopolitical challenges of Western liberalism to Russia. His return to Russian Orthodox traditionalism to overcome such political anomie is highly applauded by White Christian nationalists in Europe and North America, because they are also dismayed with liberal globalism. They believe in common Christian traditions with post-Soviet Russia. Quite importantly, Putin’s constitutional amendment mentions faith in god and straight marriage, based on Russian Orthodox values (“Russia's Putin wants traditional marriage and God in constitution”; BBC News; 3 March, 2020). But that is a complete infringement of the principle of the modern nation state, that is, separation of church and state. Fundamentally, it echoes with the argument of the Christian Right-wing in the United States, who demands the Genesis creation narrative of the Bible be taught at school, rather than the theory of evolution.

Putin’s czarist Christian value was put into practice soon after the corona outbreak. Russia provides an extensive corona aid to Italy. The Kremlin seizes this opportunity to boost their influence in this country. Geopolitically, Italy has been the soft belly of NATO, since the Cold War era. The Communist Party in Italy was the largest in Western Europe, and she had close economic ties with the Soviet Union to import oil and to build a car factory there. Even after the fall of the Soviet Union, such strong ties continue. Whether far right or far left, Italian populists have been dissatisfied with strict European standard of transparency of governance, thus, they are willing to embrace Russia and China, rather than their fellow EU nations and organizations (“With Friends Like These: The Kremlin’s Far-Right and Populist Connections in Italy and Austria”; Carnegie Endowment for International Peace; February 27, 2020).

Particularly in the north, the Lombardy-Russia Cultural Association, which is sponsored by a Russian Christian ultra-rightist Alexey Komov, who is deeply associated with the American far right organizations, including the WCF (World Congress of Families) and the NRA, serves as the gateway of Russian influence (“A major Russian financing scandal connects to America’s Christian fundamentalists”; Think Progress; July 12, 2019). As if in consort with the Kremlin, Hungarian Prime Minister Victor Orbán seized the opportunity of the corona crisis to suspend the parliament and cement his dictatorship furthermore (“Orbán Exploits Coronavirus Pandemic to Destroy Hungary’s Democracy”; Carnegie Endowment --- Strategic Europe; March 31, 2020). In view of those actions of Putin’s Russia and European far right, the corona outbreak accelerates the power game before the incident, rather than changing the framework of international politics completely.

In addition, the proposed amendment defies international norms. It states that domestic law is superior to international law. In practice, Russia has violated international law, such as invading Georgia in 2008, annexing Crimea in 2014, and frequent human rights abuses at home. Also, the Kremlin has not been committed to trade liberalization since joining the WTO in 2012. However, this amendment sends a clear message to Putin’s domestic supporters that Russia stands firmly against the West (“Russian law will trump international law. So what?”; AEIdeas; January 16, 2020). Putin also proposes a ban on territorial cession, which would complicate the relationship with Russian neighbors, particularly, with Japan and Ukraine (“Putin wants constitutional ban on Russia handing land to foreign powers”; Reuters; March 3, 2020).

It is quite likely that these amendments are based on sovereign democracy, which is advocated by Vladislav Surkov, the closest advisor to Putin. The fundamental idea of this ideology is that democracy in Russia is deeply rooted in her sovereignty and cultural tradition, thus, the West should not interfere in domestic issues like human rights and checks and balances (“Putin's "Sovereign Democracy"; Carnegie Moscow Center; July 16, 2006). Open Democracy comments that it is not an intellectually inspiring ideology, and just a propaganda (“'Sovereign democracy', Russian-style”; OpenDemocracy; 16 November, 2006). Interestingly, Surkov’s sovereign democracy resonates with Yoram Hazony’s nationalist democracy among the Western far right, which influences the thoughts of some Trump staff of the United States, notably, Secretary of State Mike Pompeo and Acting DNI Richard Grennell, who was the Ambassador to Germany until quite recently. Therefore, Putin’s constitutional amendment poses critical implications globally, much more than commonly understood. Meanwhile, the national referendum on this constitutional amendment, that was scheduled on April 22, was postponed, because of the corona crisis (“Kremlin Mulls Date for Post-Virus Vote on Putin's Constitution Reform”; Moscow Times; April 22, 2020). It is not clear how much it delays Putin’s foreign policy schedule.