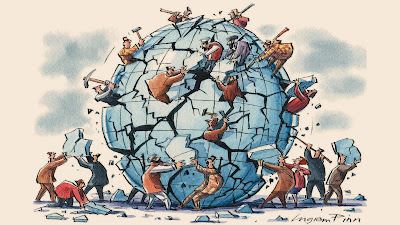 Quite paradoxically, nationalism can make the nation mediocre in the world. Currently, populist nationalism of US President Donald Trump turns out caustically divisive in domestic politics. On the global stage, it could invigorate micronationalism, and fragment the nation state and regional organizations. Eventually, that could enfeeble American allies and the United States itself. Earlier this year, former Deputy National Security Advisor Michael Anton explains Trump’s foreign policy criteria as an insider of the administration (“An insider explains the president’s foreign policy.”; Foreign Policy; April 20, 2019).

Apparently, Trump is not neoconservative, nor is he paleoconservative. According to Anton, his foreign policy viewpoints do not fit into any ideological categories, but his America First slogan comes from homing instinct, which is naturally embedded in human minds. It seems that Anton assumes properly on this point, because a populist like Trump do not express his ideas in sophisticated notions. For further understanding, this article describes Trump’s foreign policy thorough applying the argument of an Israeli political philosopher Yoram Hazony, who is the author of “The Virtue of Nationalism”. Hazony did not invent the Trump phenomenon, but he provides theoretical foundations for far right populism in the West.

Hazony contrasts the notion of polis and empire in accordance with Aristotle’s “Politics”. A polis consists of homogeneous ethne, which means “ethnic” in English. He argues that “polis” is founded on communitarian instinct, which he mentions “love of one’s own”, and that reinforced self-motivated patriotism among polis citizens such as Athenians and Spartans. Anton applies his theory to justify Trump’s America First foreign policy, “Make America Great Again”. On the other hand, an empire is a heterogeneous polity of universalism. He mentions historical fallacy of the Achaemenid Persia and Rome, through the work of Xenophon, Machiavelli, and Montesqieu. In his view, multi-ethnic empire is so huge that it needs an extensive scale of armed forces and secret police networks to maintain the order, which makes its polity repressive. Likewise, he says, current globalization and regional integration alienate the human nature to “love of one’s own” ethne.

The problem is ethne can be defined broadly or narrowly, depending on preference. Alexander the Great defined it broadly, when he started the war against Persia, and his Hellenes were the whole Greeks, including Macedonians. On the other hand, micronationalists today define it narrowly. We have to bear in mind that since the modern nation state is not so small and homogeneous as Greek polis, their interpretation of this word can provoke fragmentation of one country, and inflict negative impacts on national and global security.

Among such micronationalist movements, the most critical one is in Scotland. Regretfully, Brexit is accelerating the trend for Scottish independence. However, Scotland is a strategic zone for British national defense. The Royal Navy is critically concerned whether Faslane nuclear submarine base and shipyards in Glasgow and Rosyth will be continually available, if Scotland were to leave the United Kingdom (“Leasing Faslane could generate £1bn a year for an independent Scotland”; UK Defence Journal; August 19, 2019 : “First Minister claims independent Scotland still eligible for Royal Navy work”; UK Defence Journal; November 22, 2019 : “Would UK naval shipbuilding continue in Scotland if it left the UK?”; UK Defence Journal; December 16, 2019). Also, Scotland is the northern front line to stop Russian intrusion from the air and the sea. Tory rightists in England are so NIMBY minded that they are excessively obsessed with EU regulations and cheap labor immigrants.

Similarly, Okinawa may rise against Japan to shed the burden of accommodating US military bases. An independent Okinawa would be a huge hurdle to implement US strategy in the Indo-Pacific region. Moreover, America itself is not immune from the peril of fragmentation. If Trump were to be reelected, California could leave the United States. Also, if the Western far right were to pursue Hazonian nationalism so irresponsibly, it could weaken the whole of the Western alliance, and ultimately, ruin their national interest.

In view of this, we have to reexamine the real meaning of Secretary of State Mike Pompeo’s case for freedom in Hong Kong, Uyghur, and Tibet. Earlier this year, Robert Kagan of the Brookings Institution pointed out that his democracy is based on Hazonian nationalism, not Lockean liberalism, and that is not compatible with long-held Wilsonian universalism of US foreign policy (“The strongmen strike back”; Brookings Institution; March, 2019). From this point of view, we can surmise why Pompeo attacks China, while he is tolerant of human rights abuses in Russia, Saudi Arabia, and Turkey. It is likely that he sponsors micronationalism in China to fragment America’s formidable industrial and geopolitical rival. Therefore, it is naïve to assume him reliable for Asian allies, simply because he is a China hawk. Remember, Europeans do not see him so favorably.

Quite interestingly, Anton complains in his article that multilateral frameworks in Europe like NATO and the EU deter America First foreign policy, while nothing does in Asia. Today, the clash between Hazonian nationalism of Trump and his populist followers, and universal liberalism of Western élites and worldwide globalists shakes international politics.

Email ThisBlogThis!Share to TwitterShare to FacebookShare to Pinterest
Categories US Leadership / World Order 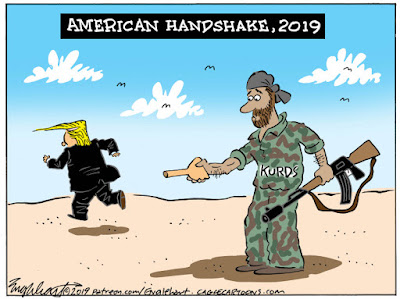 The global community was startled to hear that President Donald Trump would withdraw US troops from Syria, and abandon the Kurds, who have been a long time ally for the United States in the Middle East. This implies that Trump has begun to carry out his outrageous election pledge to scale down America’s security commitment on the global stage. Quite importantly, Trump’s America First actions go beyond Syria. Now, it has become clear that his corrosive words are not for a poker game, and he is really abandoning American hegemony, so irresponsibly.

To begin with, let me talk about geopolitical retreat from Syria. Bitter backlashes came from Democrats and even from Trump’s fellow Republicans, as they are critically concerned with the geostrategic advancement of Russia and Turkey, and the resurgence of ISIS, following the power vacuum. Also, that is partly because Syria is not an election issue (“Why did Trump betray the Kurds? The rationales make no sense.”; Washington Post; October 10, 2019). The most fundamental mistake is that Trump confuses “endless war” in the Middle East with open ended military presence to maintain the alliance network, according to Richard Haass, President of the Council on Foreign Relations. In other words, Trump’s America First pledge is based on misguided assumptions (“The High Price of Trump’s Great Betrayal”; Project Syndicate; October 17, 2019). Ironically, Trump makes the same, or even worse mistake than his Democratic predecessor did. As to this, Max Boot comments the following. In 2011, President Barack Obama rejected to intervene to stop Syria from using chemical weapons against the opposition until Assad crosses the Red Line, though Secretary of State Hillary Clinton, CIA Director David Petraeus, and Senator John McCain in those days argued for military aid to the rebels, and creation of safe zones and no-fly zones. That was simply for fear of another Iraq quagmire. But Obama failed to deter Assad from crossing the line, and reversed his Syria policy to support the Kurds, later. In view of this, Boot criticizes there is nothing legitimate, regarding Trump’s abandonment of the Kurds, as it simply invigorates Turkey and Russia (“Obama’s Syria policy was bad. Trump’s is worse.”; Washington Post; October 22, 2019).

In addition to geopolitical supremacy in the Middle East, Trump is damaging the universal legitimacy of American values. The Trump administration dismisses broadly shared understandings of Kurdish-Turkey relations among foreign policy communities. Syrian Kurds are closely tied with the PKK in Turkey. Despite communist backgrounds in the past, the PKK today is regarded as a freedom fighter group like the ANC in South Africa, among Middle East democratization experts, such as Michael Rubin at the American Enterprise Institute (“It’s time to acknowledge the PKK’s evolution”; National Interest; January 25, 2019). On the other hand, Secretary of State Mike Pompeo agrees with Recep Erdoğan that the PKK is a terrorist group, and defends Turkey’s incursion, from his Hazony-styled nationalist point of view (“Turkey had ‘legitimate security concern’ in attacking Syrian Kurds, Pompeo says”; PBS News Hour; October 9, 2019). Therefore, the Trump administration treats Syrian Kurds bluntly, even though they helped America’s war on terror a lot, which faced bitter bipartisan criticism in the Congress.

Trump’s abdication of geopolitical responsibility and “quid pro quo” nationalism has led to an inevitable clash with American allies. In the Middle East, Israel realized that Trump was as reluctant as Obama to stand up against threats like Iran and so forth (“After Trump abandons Kurds, Israel knows it can’t rely on anyone”; Jerusalem Post; October 7, 2019). His Evangelical base is nothing reliable, when Israeli security is critically tested. More importantly, the trans-Atlantic rift is growing terribly. It is not just a resurgence of terrorism and the influx of refugees that terrifies Europeans, after American withdrawal from Syria. Garvan Walshe, former national and international security advisor of the British Conservative Party, comments that Trump’s abandonment of the Kurds is a notice to tell Europeans that those who depend on America’s security umbrella at present can choose either serve for Trump’s personal interests like Ukraine’s Zelensky, or act on their own, which chilled the spine of Poland, Latvia, and Lithuania (“Kobani Today, Krakow Tomorrow”; Foreign Policy ---- Argument; October 16, 2019).

The isolationist policy that arises from the Syrian fiasco inflicts tremendous damages beyond the Middle East and Europe. In Asia, Trump skipped the East Asian Summit, this November. He does not give consideration to strategic rivalries with China (Twitter: Ely Ratner; October 30). Furthermore, he even suggested withdrawal of US troops from South Korea, as defense cost talks did not make progress, which upset Defense department officials (“Pentagon denies report U.S. mulls pulling up to 4,000 troops from South Korea”; Reuters; November 21. 2019). Meanwhile, the Defense Intelligence Agency released a report to assess that ISIS would rise again in Syria in the long term, even though the US troop killed the leader Abu Bakr al-Baghdadi successfully (“Trump's pullout from Syria allowed ISIS to gain strength, intel agency reports”; Politico; November 19, 2019). After all, Trump has fired the adults in the room, and hurdles against implementing his America First election pledge have been removed. If he were to be reelected, it would be catastrophic for the global community. In that case, American allies and foreign policy makers would have to work totgether to explore the damage control against his words and deeds.