The Trump administration is in a mess as shown in too many scandals and leaks. Some muckraking books are published, and draw extensive public attention. People talk about Trump’s gossips and idiosyncratic personality, but that is not so much helpful to understand current politics in the United States. Every day, Donald Trump annoys people across the United States and around the world with his smellingly vulgar words and deeds. It is quite difficult to see why so many voters were fascinated with Trump’s anti-globalism and anti-intellectualism like rebellious teenagers. Evidently, defiance to the orthodox political economy is destined to end in catastrophe. Nevertheless, Trump has a staunch base that still wants to bet on him. Some pro-Trump foreign opinion leaders argue that people need to be more respectful to innumerable American voters who endorse him with a great expectation to manage the nation in rapid transition. But we have to be critical to the political impact of Trump’s incivility, ignorance, corruption, and leadership style.

David Frum, the author of this book, was a speech writer for ex-President George W. Bush, and currently a senior editor of the Atlantic. Frum is a well known conservative pundit, and therefore, his criticism to Trump is not a liberal propaganda. We have to remember that so many conservative intellectuals have left from the party of Trump. This is why his analyses are extremely valuable. “Trumpocracy” focuses on the power of the Trump politics, not his personality, that is, how he gained it, how he has used it, and why his abuse of it is not checked effectively. Also, this book focuses on voters who empower and support him, rather than Trump himself. This approach is a back to the basics of political science. 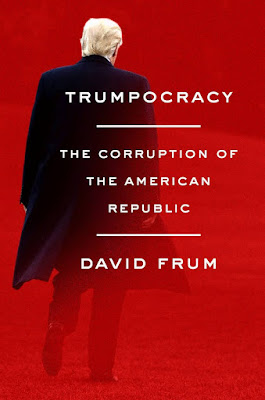 To begin with, it is necessary to understand pre-existing conditions that have given rise to Trump. Since the enemy had disappeared shortly after the Cold War era, policy focuses have shifted from national security to domestic economy, such as stagnant growth in those days and the financial crises since 2008. As a consequence, ideological, cultural, and class feud within the nation has become intensified. In a grassroots psychology like this, fake news grew increasingly influential, as typically seen in the Obama birther dispute. Trump has seized this opportunity. Frum points out that Trump did not surge suddenly in 2016. In his bid for the Republican presidential nomination in 2012, he rose to the top in April. He exploited grassroots anger by appealing conspiracy in Obama’s birther case. This was the prototype of Trump’s nasty disinformation campaign in 2016 that defamed his opponents severely. From this point of view, experts underestimated the threat that he has posed to liberal democracies throughout the world.

Having shown the premise of the argument, Frum explores how Trump acquired power, and who helped him. At the beginning, there were enablers or core supporters who gave rise to Trump in the Republican primary. It is their anger and grief that drove him to emerge as the front runner in the Republican race. Grassroots conservatives are infatuated with Trump so much that they do not care ideological integrity, but they are increasingly dismayed with cultural and economic insecurity through globalization. In addition to such loser mindsets, they are in “information ghettos”, thus they are easily driven by Trump’s propagandas. Starkly in contrast, Frum points out that these Republican voters were not impressed with “The New American Century” that Ted Cruz and Marco Rubio advocated. As the Trump momentum grew, Republicans who were reluctant to accept him convinced themselves that Trump was the only alternative to Hillary Clinton. Those appeasers were willing to propagate fake news about Trump’s opponent such as Clinton was responsible for the rise of ISIS, and so forth. Quite interestingly, anti-élite biases kept working class women from voting for her. In their view, gender equality that Clinton represents is only for white collars, and totally irrelevant for them. Grassroots conservatives as typically seen in the Tea Party, do not adhere to market orthodoxy, but they object to welfare preference based on political correctness that Democrats give. In other words, Trump’s base is inclined to tribalism, and strongly against diversity.

In addition to the above political mechanisms, this book sheds light on how Trump used dirty techniques to turn conservative media into his propaganda platform. Quite interestingly, Fox News, which is one Trump’s favorite media now, was firmly anti-Trump at the early stage of the primary. Notably Megyn Kelly questioned Trump’s groundless claim that Mexico sent criminals to the United States. Quite surprisingly, Trump complained about her continually in CNN interviews. Both TV stations were in completely the opposite positions from those today. As is always the case, Trump retaliated Kelly through releasing gossips to defame her. As a result, alt-right anchorman Tucker Carlson has replaced her. We have to notice Trump’s hijack of conservative media, because this is a precursor of his mafia styled conquest of the Republican Party. Frum points out that Trump exploits fear and anxiety to dominate the Republican Party as he always does. While Trump is unpopular, his primary opponent within the party Paul Ryan is no less unpopular because he is a fiscal austerity doctrinaire. Paradoxically, this has made Trump more powerful than Congressional Republicans. Particularly, House Republicans desperately want Trump to sign their bills, before their majority expires after the midterm election. Driven by such worries, they defend Trump so loyally as his base, when he faces charges from the Russia probe to sexual harassments.

The nature of governance is also a critical issue that Frum discusses in this book. During the primary, Republican rivals likened Trump to a Latin American caudillo. Trump’s business is notoriously untransparent, as shown in his information closure on his tax return. Also, he spends public money for his travel to his golf courses like Mar-a-Lago, and even did public election funds for hush money payment for women whom he had affairs. As long as people assume it imperative to abide by the morals and social norms, politicians behave accordingly.However, if people tolerate unethical conducts by politicians, corruption prevails throughout the nation, they assume their misconducts are forgiven, which finally leads the whole nation to embrace autocracy and kleptocracy. Frum explores furthermore, how these aspects cast dark shadows on Trump’s handling of his staff. Trump demands loyalty and flattery to dominate his team, but he does not give rewards. He is notorious for firing his staff impatiently. Therefore, those who joined his administration with lofty motivations will be betrayed ultimately, as Eliot Cohen said during the transition period, because they are forced to make excuses for Trump’s sporadic remarks. Typically, when Trump mocked American obligation to Article V at the NATO summit in May 2017, National Security Advisor H. R. McMaster was forced to defend his president that he did not say so.

The corrosive nature of Trump supporters and the current administration has overturned my preoccupation that conservatives are supposed to be more moralist, while liberals were tolerant to social heresies like LGBTs. Frum mentions furthermore, that rigged election system reinforces these aspects. It is frequently pointed out that Hillary Clinton failed to win black voter support. This book mentions that Republicans exploited midterm election victories in 2012 at national and local level, actually. They made new election rules to keep minorities away from voting, such as restrictions to early voting. As a result, black voting turned downwards in 2016. During the campaign, Trump blamed everything against him “rigged”. But in reality, the American political system has given disproportionate and dubious favor to his base. It seems to me that Republicans were traumatized with their repetitive loss to Barack Obama so much that they were desperately in need of retaking the White House, by fair mean or foul.

This book narrates and analyses sullen political landscapes of current America. More seriously, Frum comments that Trump’s antipathy to the "deep state" could strengthen it paradoxically, and alienate democratic governance. Ever since Trump’s inauguration, political analysts, both in the United States and overseas, talk about the control of Trump through the adults in the team. Also, American policy experts insist that federal institutions such as governmental bureaucracy, military organizations, intelligence agencies, etc, would stop Trump by all means, if he were to overturn everything. Actually, national security establishment rectified Trump’s appalling remarks at the Helsinki summit with Russian President Vladimir Putin, such as his trust to Putin rather than American intelligence agencies, and an agreement to send former ambassador Michael McFaul to Russian intelligence inquiry. However, Frum raises a critical concern that the military would edge Trump out of the command structure without being noticed, if they saw him unfit to the president. He worries furthermore, that such a move would make national security agencies uncontrollable for any president, and they would alienate a Democrat president in the future like this way.

I would say that the above situation is quite similar to Japan in the 1930s, when people lost trust in the Taisho democracy, and subsequent coup d'état attempts led to military rule. Are things in current America so desperate? According to Frum, there is a hope. The Trump phenomenon sheds light on social inequality from globalization and popular resentment that was dismissed by élites. However, it has turned out that his lie politics faces a nationwide resist. Also, his affinity to Russia has awakened the political left, which turned them more conscious of national security. Finally, I would like to mention Frum’s advice on how to manage Trump’s politics of profanity. When he attended a Politico conference in Pasadena, California, one panelist said, “We can’t stop Trump by going soft. If we want to stop him, we have to imitate him.” In reply, Frum said “But if you imitate him, you won’t stop him. You’ll only replace him.” He is right, but that is quite difficult to do, because Trump’s rancid vulgarity provokes our anger at him. We have to be patient and rational. This book overwhelms the reader with numerous political interactions explained in detail. I would firmly recommend “Trumpocracy” for a textbook of Trump politics, as Frum presents cool-headed and persuasive analysis.