The Catastrophe of US Troop Withdrawal from Germany 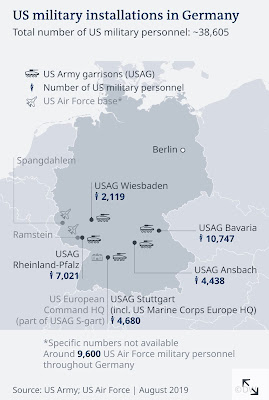 President Donald Trump declared abruptly that he would pull out 9,500 soldiers from Germany this June, which dismayed national security officials of both countries. The focal point is that Trump’s appalling election pledge to pull out US forces from overseas is not a bluff, but real. This is not the first time. Last autumn, he abdicated Syrian Kurds who was a key ally for the United States in the War on Terror. Now, Trump is implementing the core policy of his America First pledge in Europe, when his presidential term is ending.

As Richard Haass mentions, Trump’s foreign policy is based on the “Withdrawal Doctrine”. He pulls America out of multilateral agreements like the TPP, the Paris Accord, the Iran nuclear deal, and other arms control agreements. Also, he abdicates security commitments in Syria and Afghanistan (“Trump’s foreign policy doctrine? The Withdrawal Doctrine”; Washington Post; May 28, 2020). Now, he is slashing American military presence in Germany. In my view, Trump’s America First is an inferior version of Obama’s Nation Building at Home, as it just provokes fears, anxieties, and discomfort among the global public.

In accordance with such views of the world, the Trump administration handles Germany vitriolically. From cabinet members like Vice President Mike Pence to nationalist scholars like Jakub Grygiel of the Heritage Foundation and Michael Anton of Hillsdale College, Trump conservatives denounce that Germany freerides the alliance selfishly, and makes use of the EU to fend off their sovereign nation bilateralism (“Trump treats Germany like “America’s worst ally”; Brookings Institution—Order from Chaos; May9, 2019). Furthermore, recently stepped down ambassador Richard Grenell wrongly said "A troop reduction would take place as a tit for tat for Germany’s continued trade surplus" (“Trump ‘to withdraw thousands of US soldiers from Germany by end 2020”; Local; 6 June, 2020). Some sources even say that Trump’s abrupt US troop withdrawal is a personal revenge to Chancellor Angela Merkel, as she declined to attend the G7 that he hosts this July. As a former national security advisor to ex-Vice President Joseph Biden, Julianne Smith of the German Marshall Fund comments that it will just hurt US interests (Twitter; @Julie_C_Smith; June 6). Yes, this is a conflict of interest.

Quite problematically, Trump made this decision without consulting without consulting with the Department of Defense and the EUCOM. However, Grenell denies this, and says that Trump has been in preparation since last year (“National security officials unaware of Trump's decision to cut troops in Germany: report”; Hill; June 9, 2020). The process shows the inherent danger of this administration, that is, vital national security decision is made only by the president and his personal loyalists. Grenell has no military expertise, and he cannot specify which troops to leave. Security experts on both sides of the Atlantic are concerned that Trump is just committed to “Make Russia Great Again” in European geopolitics (“Real or Not, Trump’s Germany Withdrawal Helps Putin”; Chatham House Expert Comment; 8 June, 2020). The real problem is that he prioritizes his reelection campaign to diplomacy. His isolationist base regards his coercive negotiation style to allies as a splendid art of the deal, and they do not care its terrible consequences on US diplomacy (“Opinion: Trump is playing election games with US troops in Germany”; Deutsche Welle; 7 June, 2020).

For American defense planners, Germany is a strategic hub of Europe, Africa, and the Middle East. Therefore, the US forces maintain a huge military presence in this country. Among those bases, Stutsgart accommodates the headquarters of the EUCOM and the AFRICOM; and Ramstein accommodates the headquarters of the US air force in Europe and Africa, the Allied Air Command of the Supreme Headquarters of Allied Powers Europe of NATO, and the Landstuhl Regional Medical Center where wounded soldiers from Iraq and Afghanistan are cured. Just as in Afghanistan (“The Aftermath Plan for Afghanistan”; National Interest; June 6, 2020), Trump thinks that US troops can be redeployed in Germany immediately when necessary. However, from a military point of view, dynamic force employment like this is relatively easy for the air force, but not so for the army and the navy (“The German Drawdown Debacle”; American Interest; June 10, 2020).

Finally, geopolitical consequences need to be considered. Robert Kagan points out that the German problem would reemerge in Europe, after the power vacuum of US pullout. That is, with the largest economy and population in the region, Germany could overwhelm her neighbors, which might destabilize the regional balance of power in Europe, as it happened in the early 20th century (“Interview with Robert Kagan: Permanence of Liberal Democracy 'Is an Illusion'”; Spiegel International; 8 November, 2019). British Prime Minister-then Margaret Thatcher raised the same concern so acutely, when Germany was reunified after the Cold War.

The German problem poses more extensive implications to global security. Like Germany, Trump has been pushing Japan and South Korea to pay more for US troops in their territories (“From Germany to Japan, Trump seeks huge premium from allies hosting US troops”; Straits Times; March 8, 2019). According to James Schoff at the Carnegie Endowment for International Peace, Trump treats Japan more favorably than Germany, as she does not brandish multilateral security framework. Therefore, he says that the problem of nasty pressure over the payment, which is stated in the memoir of former National Security Advisor John Bolton, is not so serious (“U.S. demanded Japan pay $8 bil. annually for troops: Bolton”; Kyodo News; June 22, 2020 and “Bolton memoir raises concern over Japan alliance if Trump re-elected”; Mainichi Shinbun; June 24, 2020). Nevertheless, Trump clings to his idiosyncratic election pledge over the payment and withdrawal, whether it is feasible or not. A second term of this administration would inflict fatal damages on America’s global alliance network.