Britain and the EU, Don’t Dismiss Russia behind Brexit 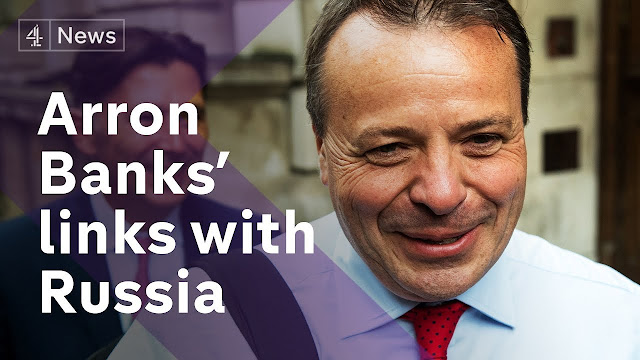 While most of the experts and the media watch close on parliamentary interactions in Westminster and UK-EU diplomatic negotiations, not so much attention is paid to British criminals who helped Russian President Vladimir Putin’s manipulation of the EU referendum. In other words, it is suspicious that current Brexit is the will of the Kremlin and traitors like Arron Banks and Leave.EU, not that of the people. Though the 29 March time limit for the deal with the EU is coming, I would argue that the process be suspended. In addition, the case of Arron Banks is strongly interconnected with the Russia probe on the Trump campaign in the United States. From these aspects, the question of legitimacy and legality of Brexit should draw more public attention.

Let me talk about the Banks case. The National Crime Agency has been investigating this affair since the Brexit vote in August, 2016. Last November, the High Court was in the process to judge the case brought by the NCA (“Brexit: High Court to rule if referendum vote ‘void’ as early as Christmas after Arron Banks investigation”; Independent; 24 November, 2018). Meanwhile, British expatriates in Europe sued a pro-Brexit organization called Vote Leave in December for illegal spending, in order to repeal Brexit (“Expats ask High Court to declare Brexit vote invalid”; Financial Times; December 7, 2018), the High Court fined only £61,000 for the organization, and some charges for individual student activists. James Eadie, Queens Counsel who represents the government in this case, commented that it was too late for a legal challenge against Brexit, because the procedure had gone through so much (“Brexit: High Court rejects challenge to annul referendum result in major blow to Remain campaigners”; Independent; 10 December, 2018 and “Expatriates lose in bid for High Court review of 2016 referendum”; Financial Times; December 10, 2018). As to Banks and Leave.EU, the Information Commissioner’s Office charged them £120,000 for violation of personal data to help Brexit movements (“Leave.EU and Arron Banks insurance firm face £135,000 in fines”; BBC News; 6 November, 2018 and “Leave.EU and Arron Banks insurance firm fined £120,000 for data breaches”; Guardian; 1 February, 2019). But this is not sufficient, in view of the critical security challenge that they posed. The Banks case is deeply intertwined with the Trump-Russia connection, and further NCA investigation could reveal something about Nigel Farage and the UKIP. Remember, Farage admires Putin, like his far right comrades in Europe and America.

Quite strangely, Russian interference in the Brexit vote is hardly on the issue on both sides of the Dover. Notably, Brexiteers of Westminster are excessively preoccupied with cumbersome regulations by Eurocrats and national sovereignty from Brussels, but their patriotism dismisses much more critical posed by Russia. From national survival point of view, EU bureaucracy is just a noisy regulator, while Russia sends agents to poison the Skripals, and intrudes the British air and sea sphere with fighters, nuclear bombers, and naval warships. But the British side is not the only one to be blamed, because both the Downing Street and Brussels focus solely on the due process of law in accordance with Article 50 of the Lisbon Treaty. In other words, May just acts as an executor of the Brexit vote, while the EU executives are preoccupied with long time conflicts between Britain and Continental Europe.

In view of such narrow-sighted simplicity, Liberal Democrat MP Layla Moran questions why May refuses the second referendum despite Putin’s theft of the will of the British people in the Brexit vote. Also, she criticizes Brexiteers for likening EU counterparts to the Nazis, while dismissing the threat of the real autocrat like Putin. Furthermore, she demands Arron Banks to explain more clearly about his donation of Russian money to Leave.EU in the NCA investigation, which is likely to continue after Brexit on schedule (“I asked Theresa May if she sides with Putin or the people – an answer would tell us who Brexit is really for”; Independent; 10 January, 2019). Nevertheless, Brexiteers only care about Britain’s “independence from Europe”. Quite interestingly, Professor Yuichi Hosoya at Keio University pointed out that the Conservative Party had become ideologically intolerant since Margaret Thatcher, as shown in her strong anti-socialism and anti-European integration stances (“May’s Historic Defeat in the Parliament over The Brexit Bill”; Nippon Broadcasting System; January 18, 2019).

Similarly, late Professor Emeritus Michio Morishima at the London School of Economics mentioned repeatedly that Thatcher’s visions were based on Methodist faith, so much that she saw everything from good and bad perspectives, in his books such as “Britain and Japan” and “Britain in the Thatcher Era”. This is typically seen in her unswerving belief in the market economy and refusal of socialism. Such oversimplified understandings of socio-economic and political issues are more like those of grassroots conservatives in America, rather than traditional Conservatives in Britain. Likewise, self-styled Thatcherite and Eurosceptics today are so narrow-sighted to focus entirely on Anglo-European discrepancies that they dismiss multi-dimensional aspects of international politics like Russian manipulation of democratic procedures in the West. They are lopsided like American far right Dana Rohrabacher, who lost the House seat in the midterm election, as he denied the Kremlin’s disinformation because Russia was no longer communist, at the House Foreign Relations Committee (“Rohrabacher: Russia Is No Longer Motivated By Communist Ideology, No Longer A Threat”; Real Clear Politics; March 10, 2017).

Meanwhile, the Open Democracy UK follows dirty money behind Brexit campaign, while major media and think tanks do not pay much attention to this. Regarding the donation from Banks to Leave.EU, thorough investigation is necessary, because Putin’s infiltration into Western democracy is a critical concern. In addition, this case is deeply intertwined with the Russia probe on the Trump campaign. The Open Democracy UK reveals another Brexit scandal that the Democratic Union Party of Northern Ireland Protestants received dubious money from India (“The strange link between the DUP Brexit donation and a notorious Indian gun running trial”; openDemocracy UK; 28 February, 2017 and “Revealed: the dirty secrets of the DUP’s ‘dark money’ Brexit donor; openDemocracy UK; 5 January, 2019) and someone associated with Saudi Arabian intelligence service (“Democratic Unionist Party Brexit campaign manager admits he didn’t know about its mysterious donor’s links to the Saudi intelligence service”; openDemocracy UK; 16 May, 2017) for their Brexit campaign. They may have been funded by Russia as well, and further investigation is required.

After all, it seems that so many inconvenient facts are hidden behind Brexit. Regardless of parliamentary and diplomatic interactions, this Brexit is too brusque and poorly prepared. I am not saying that Britain stay firmly in the EU forever. But the consequence of the EU referendum has simply brought confusion both inside and outside the United Kingdom. Some negative impacts on the economy are seen like financial companies’ shift to Frankfurt and the closure of Japanese car factories. Simply, that pleases Putin as it is his vital security interest to weaken the Western alliance. Above all, the validity of Brexit vote is questionable, whether the result is the will of the people. Fortunately, the May administration and the EU are extending the Brexit date, as Westminster rejected the bill repeatedly (“EU Wants a Brexit Delay But Governments at Odds Over Length”; Bloomberg News; February 26, 2019). In view of such turmoil, I would argue that British and European stakeholders wait and see the results of criminal investigations by public organizations like the NCA and private organizations like the Open Democracy UK. Unlike James Eadie, a legal advisor to the UK government, says, it is not too late to reexamine the validity of Brexit, from legal and national security perspectives.