The Trump Republican’s Dangerous Shift towards the Far Right 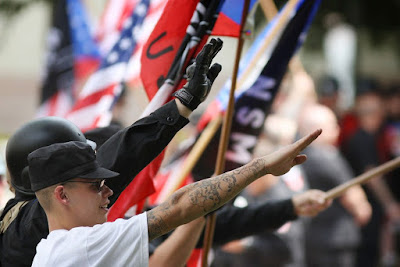 As rumored among experts and the media, the Trump administration is reshuffling the cabinet after the midterm election, through firing adults like White house Chief of Staff John Kelly and Secretary of Defense James Mattis, in order to remove hurdles to keep the election pledges. President Donald Trump declared to withdraw US troops from Syria and Afghanistan, though terrorists are still formidable for local troops, and geopolitical power vacuums after that is critically concerned (“Mattis resigns after clash with Trump over troop withdrawal from Syria and Afghanistan”; Washington Post; December 20, 2018). In addition to this, Trump adheres to the budget to the wall on the Mexican border too obstinately, which has led to the clash with the Congress and subsequent government shutdown inevitable (“The Latest: Democrats refuse to fund Trump’s “immoral” wall”; AP News; December 9, 2018). Clearly, the administration is shifting towards the far right. Everything goes as William Kristol said that Trump only wanted to occupy the Republican Party with his loyalists, and did not care about moderates who lost the seat in the midterm election (@BillKristol; Twitter; November 7, 2018 and @BillKristol; Twitter; November 12, 2018).

It is not the administration and the Congress that matters. The shift to the far right could change the Republican base, which would provoke further shift to xenophobic populism. A warning flash emerged in the semiannual CNBC millionaire survey in the last November. According to this poll, the rich are losing trust in Trump, including those of Republicans. Their population may not be large, but they are politically active in voting in the election and donating to campaigns (“Wealthy Republicans lose faith in Trump, as nearly 40% say they wouldn’t vote to re-elect him: CNBC survey”; CNBC News; December 23, 2018). The rich worry governmental dysfunction (“The biggest risk to millionaire wealth is Washington: Survey”; CNBC News; December 17, 2018). That is understandable, because political and national security risks are market risks. Trump’s poor handling of domestic and international politics can provoke them to break away from Republicans, which could enhance the far right furthermore within the party.

Such “Corrosion of Conservatism” implies that the Trump far right more caustic than the Democrat left. I would like to mention the following reasons for this. Firstly, even Democrat leftists like Elizabeth Warren and Nancy Pelosi are more willing to abide by bipartisan foreign policy common sense than Trump, as they have long and responsible congressional careers. Secondly, Trump adheres to unrealistic election pledges so obstinately as seen in the latest government shutdown over the wall on the Mexican border. Also, he defies everything in college textbooks of policy making as shown in his trade wars and alliance breaking. Thirdly, Trump’s leadership style is quite like that of corruptional Third World dictators, as he demands mafia-like personal loyalty to his staff. That could jeopardize American democracy. After all, no other politicians, regardless of partisanship and ideology, have such aberrant temperament.

The fourth reason is the most critical, and it has global implications. That is Vladimir Putin’s sponsorship of the far right in Europe, and the Trump phenomenon is a ripple effect of it. People focus on domestic aspects that give rise to him, but we cannot dismiss the worldwide crisis of democracy. As we know, Russia has been intervening Eastern Europe to restore Soviet era geopolitical influence there. Putin’s Russia goes furthermore into major powers in Western Europe. The most devastating one is Russian interference in the Brexit vote, which is deeply interconnected with the Trump case. At the end of the last year, the British National Crime Agency started to investigate an anti-EU businessman Aaron Banks, on suspicion of financing Leave.EU’s campaign in the EU referendum to help Russian troll on the web (“UK National Crime Agency Starts Investigation Into Eurosceptic Businessman Aaron Banks”; EU Today; November 1, 2018). More importantly, the High Court of England and Wales told the media that Brexit might be illegal and invalid, if the case was guilty (“Brexit: High Court to rule if referendum vote ‘void’ as early as Christmas after Arron Banks investigation”: Independent; 24 November, 2018). Just before Christmas, it was revealed that Banks talked with Cambridge Analytica whose notorious ties with Russia and the Trump campaign team are frequently mentioned, to help micro-targeting of British voters by Leave.EU (“Revealed: Arron Banks Brexit campaign's 'secret' meetings with Cambridge Analytica”; 19 December, 2018; openDemocracy UK). In addition to Britain, Putin demonstrated his support for Marine Le Pen in the 2017 presidential election in France. Also, pro-Russian French nationalists Fabrice Sorlin and Xavier Moreau joined the recent Gilets Jaunes riot (“"Russian World" supporters fly "DPR" flag at yellow vest protest in Paris”; UNIAN News; 8 December, 2018).

Quite conspicuously, Russian politicians and media cheered Trump’s decision to fire Mattis over Syria and Afghanistan. Konstantin Kosachev, head of the Foreign Affairs Committee in the Upper House of the Russian Parliament, said that “the departure of James Mattis is a positive signal for Russia, since Mattis was far more hawkish on Russia and China than Donald Trump” (“Russia Gloats: ‘Trump Is Ours Again’”; Daily Beast; December 21, 2018). But such geopolitics is not the ultimate reason why Putin and right wing populists in Europe and America are so friendly with each other. Western far rights see strength, traditionalism, and nationalism in Putin’s personality and leadership. More importantly, they share common values such as fighting against Islamic extremism, protesting global economic integration, and reverting secularization of the society. After 2012 when Putin was reelected for the president, he launched anti-LGBT campaigns, which has won high esteem among Western social conservatives (“Putin and the Populists”; Atlantic; January 6, 2017). With this synergy of geopolitics and far right values, Russia can shatter the moral ground of liberal democracy. Even China finds this job too big for herself, despite her ambitious Belt and Road Initiative, and formidably growing economy.

The far right coalition led by an antagonistic dictator like Putin is so devastating that we have to keep a closer watch on them rather than the left, just as Winston Churchill made up his mind to fight against Adolf Hitler rather than Joseph Stalin. Some pundits comment that even the superpower is not omnipotent, and we should embrace popular anxiety, plight, and hopelessness in the global economy and a divided nation, that has led to the Trump presidency. Certainly, we should analyze the reason why he won the election unexpectedly, and make every effort to resolve those problems that has enabled such a demagogue. However, we should never embrace nor sympathize with Trumpism that destabilizes the world day by day. Still, there is some hope in the Republican Party. Newly-elected Senator Mitt Romney is expected to assume a key role to boost anti-Trump Republicans, and to lead them. Also, Senator Marco Rubio advances bipartisan politics (“Rubio Encourages Bipartisanship in Policymaking”; Hoya; October 5, 2018). Meanwhile, there is no doubt that the Democrat left is less caustic than the Trump Republican, but they are also problematic both domestically and globally. Max Boot comments foreign policy of Elizabeth Warren and Bernie Sanders as the following. Though they are more respectful to multilateral cooperation than Trump, they do not share bipartisan understanding of the American liberal world order with foreign policy establishments. Since Warren argues that free trade benefits global big businesses at the expense of American workers, and Sanders insists on the pullout of US troops from Syria and Afghanistan, rather than fulfilling the role of the world policeman, Boot calls them Trump of the left. Moreover, both of them do not show their ideas how to manage the threat of authoritarian powers like China and Russia (“The Democrats need a new foreign policy — one that doesn’t sound like Trumpism of the left”; Washington Post; December 26, 2018).

In view of such a strong presence of isolationists in both parties, Republican internationalists and Democrat moderates should align each other. Our real enemy is much bigger than a fat mad man named Donald Trump. The ultimate threat to us is alt-right ideology, which could persist even if Trump himself were forced to resign by impeachment or some scandal. This monster is immortal, and neither a knife stab nor a gun shot can exterminate it. Also, we should act beyond observing and analyzing what happens in America. We are not in a position to interfere illegitimately in American politics like hacking as Putin’s Russia did. However, pundits from American allies, notably, from Europe and Japan, can talk directly to American voters to promote understanding of allies’ contribution to American security, and the fallacy of America First. They do not have to criticize Trump specifically. Such campaigns should be in close coordination with bipartisan internationalists and moderates. This role is more suitable for private pundits rather than government officials. I believe this is a legitimate intervention in American politics. We should not just wait and see, but act!