The State of World Nuclear Weapons

See the chart below. 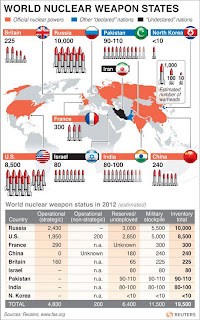 Nuclear armed nations are appearing, but only Big 5 have operational nuclear warheads.

Some proliferators like and are not ready to fire warheads immediately. They claim nuclear power status, primarily for brinkmanship diplomacy and sponsoring terrorism. Senator Bob Casey testified “A nuclear Iran would feel empowered to conduct more terrorist attacks against U.S. and Israeli targets, provide more lethal assistance to Hezbollah and Palestinian militant groups, and give the Quds Force greater freedom to support terrorist groups across the Middle East,” at a Senate Foreign Relations subcommittee (“USSenators Examine Iranian Involvement with Terrorism”; VOA News; July 25, 2012). will act similarly to , , and the .

Also, we have to note that lack of transparency with Chinese nuclear weapons. It is unknown how many warheads are operational for strategic and tactical use. Such a big power has not joined nuclear arms cut negotiations, and leaves the responsibility to the and . Beijing Communist Party should disclose more information about their nuclear weapons.

The Role of Europe in Asia 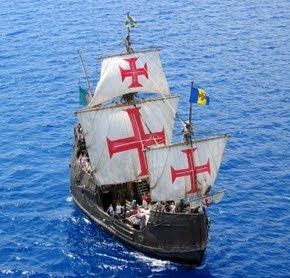 Sailing in quest of the Asian dream!

When people talk about the Pacific century, they tend to focus on regional powers like the United States, China, Japan, Russia, India, and other middle and small nations in the Asia Pacific area. However, actors outside the region can have indispensable influence on Asia, particularly Europe. Historically, Europe and Asia have deep ties each other since the Age of Discovery. Not only big powers like Britain and France, but also smaller powers like the Netherlands, Spain, and Portugal have long historical interactions with Asia. Europe can provide so many things that Asia needs such as investments, knowledge, brand, and export market. A more active Europe will provide invaluable help to the United States, Japan, and other Asia Pacific democracies in geopolitical rivalries against China and Russia, and in dealing with unpredictable threats of North Korea.

Will the rise of Asia overshadow Europe? Judy Dempsey, Senior Associate at Carnegie Europe, mentioned some opinions by top experts on both sides of the Atlantic to explore Euro-Asian relations on her blog (“Judy Asks: Should Europe Fear the Pacific Century?”; Strategic Europe; June 27, 2012). While demography may favor younger Asia to ageing Europe, Asians face tough regional problems such as rising nationalism, numerous territorial disputes, growing economic imbalances, and massive environmental degradation. Europe can help Asian nations in socioeconomic development, human rights, good governance, and technology. However, some experts see that Europe will play a limited role in Asia.

For many Europeans, Asian power politics is remote, and they are satisfied with strong economic ties in trade but small commitment in security. Taking all of those into consideration, there is a distinguishable aspect in Europe’s approach to Asia. Though sharing values with the United States, Europeans prefer multilateral and civilian solutions to manage Asian crisis like South China Sea issues and the Aceh dispute. I find some similarities between what Dempsey discusses in this blog post and Japanese diplomacy. Sharing political values and socioeconomic development stage, Europe and Japan can found a closer partnership to manage diversified challenges in Asia.

Rising economy and growing political tensions in Asia will pose substantial impact on an increasingly globalized world. Therefore, Europeans need to play more active roles in Asia, and should not be content with happy and prosperous life in their homeland. Former Japanese Prime Minister Shinzo Abe commented that European leaders were not keenly aware of Chinese threats until Beijing succeeded in sending an astronaut into the space. Once actively involved in Asia, Europe will share more security interests with the US-Japanese alliance.

For further understanding of European approaches to Asia, it is necessary to understand their stances on the global stage. As Robert Kagan comments in his well known book “Of Paradise and Power”, Europeans leave security responsibility to American sheriff. It is not geographic remoteness but post imperial mindset that leads Europeans to shy away from Asia. An advocate for the Iraq War by the Bush administration, some people misunderstand Kagan a unilateralist. That is wrong. He endorses a close trans-Atlantic alliance to tackle global challenges, and from this context, Europeans must be much more keenly aware of their roles in Asia. An active Europe will present valuable advantages to Asia-Pacific leaders like Ex-Prime Minister Abe or whoever else.

Europe can act as a global power either through a collective channel of the European Union or an independent channel of a sovereign state. The Asia-Europe Meeting (ASEM) is one of collective channels to deepen Euro-Asia relations. The EU gives amazing opportunities for small nations to punch above their weight, but Stefan Lehne, Visiting Scholar at Carnegie Europe, comments that the Big Three often chooses to act on their sovereign basis, and compares foreign policy of Britain, France, and Germany (“The Big Three in EU Foreign Policy”; Carnegie Paper; July 2012). Based on his paper, I would like to mention the Big Three’s approach to Asia. Winners of World War Ⅱ and possessors of nuclear weapons, Britain and France pursue more ambitious policy, while Germany is reluctant to assume leadership roles.

The United Kingdom envisions strong ties with Asia. Ambassador to Indonesia Mark Canning used a word of “re-prioritisation” in a blog post of the Foreign and Commonwealth Office when he addressed Britain’s policy in Asia ("EU has Arrived"; FCO Blogs;April 27, 2012). Ambassador Canning assumes a very influential position in Britain’s Asia-Pacific policy as he concurrently serves as the ambassador to ASEAN. Britain is exploring more influence in Asia as the United States and Russia are. Jonas Parello-Plesnersenior, Policy Fellow at the European Council on Foreign Relations, points out that the United Kingdom hopes other European nations to follow suit.

France also takes some impressive actions in Asia. Shortly after the Fukushima shock, it sent top experts to manage the nuclear reactor crisis to help Japan. In arms export to India, Dassault’s Rafale edged out F-35 and Typhoon. French approaches to Asia are more realist than idealist. This may be partly because France does not have liberal imperialist tradition which Britain does, and partly because it was defeated ignominiously in the battle of Dien Bien Phu to withdraw from Viet Nam.

Things are different in the case of Germany. Though it is the second largest exporter of the world, trauma of defeat in World Wars makes this country hesitant to act as a great power. It is the most postmodern nation among the Big Three, and more likely to associate itself with the European Union. However, Germany is reluctant to assume leadership in EU based common foreign policy. Instead of political burden sharing with other major powers, Germany prefers trade oriented diplomacy. Therefore, it is quite unlikely that Germany aspires to exert great influence in “remote” Asia.

Each sovereign state has its own interest in Asia. Quite importantly, experts almost unanimously agree that the Pacific century does not mean Asian domination of the world, but it presents nations outside the region with more opportunities for economic growth. They argue that Europeans need not fear the rise of Asia and the decline of the West. Europe may not be a primary actor in Asia, but Daniel Keohane, head of strategic affairs at a Brussels based think tank FRIDE, quotes an old proverb, ““He who is Lord of Malacca has his hand on the throat of Venice”.

A close Euro-Asian tie will have spill over effects on other external actors. A BRICS nation South Africa is one of such examples. Not only in terms of geography, but also in terms of history, race, and culture, South Africa connects Europe and Asia. It is no use for descendants of Christopher Columbus and Vasco da Gama to fear benign neglect by America and the decline of the West. Europe should act along with the United States and Japan in quest of the Asian dream.
Posted by Σ. Alexander at 2:23 AM No comments: