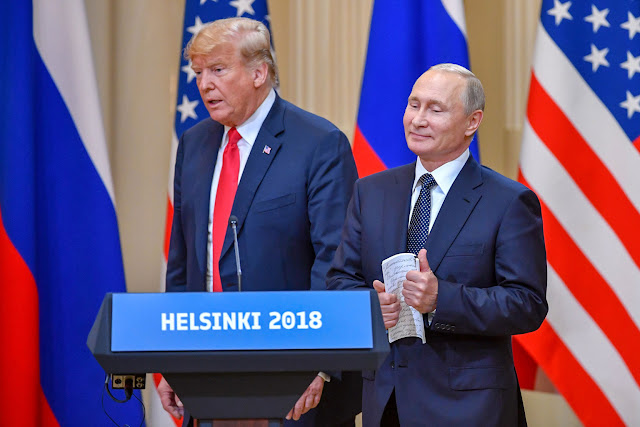 Confident Putin and nervous Trump at the press conference.


It has turned out that American foreign policy pundits and intelligence community were right to raise critical concerns with the Helsinki summit, since President Donald Trump’s election team is suspected of collusion with the Kremlin during the presidential campaign in 2016. As expected, Trump spurred criticism from the media and national security experts at the joint press conference with Russian President Vladimir Putin. As the full text of this communique says, both sides did not give details about what was discussed on critical security issues like Crimea and Syria, but just mentioned mutual disagreements over these issues (“Read the full transcript of the Helsinki press conference”; Vox; July 17, 2018). Therefore, it is not clear whether Trump admitted Putin’s annexation of Crimea, or left Syria to Russia. It is interpreted that Trump had no intention of pushing Putin hard over legality of the annexation of Crimea and humanitarian treatment of refugees in Syria (“Putin didn’t have to push the Kremlin’s narrative. Trump did it for him.”; Brookings Institution; July 20, 2018). Meanwhile, Trump made a controversial and naïve remark that Russia had not intervened in the election because Putin said so. Not only did Trump say that he trusted Putin more than American intelligence agencies, but also tell that he would admit the Russian intelligence agency to inquire Americans and allied nationals whom the Kremlin saw unfavorably, in return for the Mueller investigation of 12 Russian spies (“Trump Says He Lay Down the Law in His Latest Account of His Meeting With Putin”; New York Times; July 18, 2018).

Those whom Putin demanded Trump to get summoned by the Russian authority include former Ambassador Michael McFaul for his anti-Putin diplomatic activities according to the Kremlin, former MI6 agent Christopher Steele who wrote the Trump dossier that reports Trump’s deep contacts with Russia and his dishonorable behavior, and a London-based businessman Bill Browder whom Putin charges for illegal transfer of $1.5 billion out of Russia to donate $400 million for Hillary Clinton’s campaign. Quite importantly, Browder lobbied for the Magnitsky Act to impose sanctions on Russia for human rights abuse (“White House says Trump to discuss allowing Russia to question US citizens”; Hill; July 18, 2018). Obviously, it is contradictory to Trump’s obsession with national sovereignty, if he hands American and allied citizens over Putin upon his request. Particularly, Putin’s demand to have McFaul interrogated is outrageous, because the United States keeps out of the International Criminal Court to protect her diplomats from adversaries (Twitter; Richard Haass; July 19, 2018). More importantly, Trump’s imprudent deal with Putin infringes on the diplomatic immunity of the Viena Convention on Diplomatic Relations. It appears that Trump was ceding American sovereignty to Putin, in order to take his personal revenge on an Obama official like McFaul and those who acted against him like Steele and Browder. Trump himself thought a rapprochement with Russia would boost his popularity among voters, but to the contrary, he faced vehement bipartisan criticism from the Congress, and even his cabinet members, including Vice President Mike Pence, National Security Adviser John Bolton and Chief of Staff John Kelly at the White House, and also, Secretary of Defense James Mattis and Secretary of State Mike Pompeo, raised critical concerns with Trump’s deal with Putin (“Pence, Bolton, Kelly confronted Trump in Oval Office about Russia comments”; Chicago Tribune; July 21, 2018).

Actually, foreign policy pundits are dismayed with Trump’s rapprochement with Putin, whether liberal or conservative. It is utterly wrong to believe that those who are obsessed with the Russian interference in American politics are liberals, as they want to defame Trump. Though the current Republican Party has become so nationalist and isolationist as to be called the Party of Putin, instead of Reagan and Lincoln, responsible pundits do not share such narrow-sighted partisanship among grassroots conservatives. James Fallows of the Atlantic Journal comments that he was shocked to see the President prioritize Russian interests, and questions whether Republicans are loyal to the party or the country (“This Is the Moment of Truth for Republicans”; Atlantic; July 18, 2018). Former Bush Administration Speech Writer David Frum is critically concerned whether the US government hears anything about the deal with Putin, and even Trump really understands the implication of the deal or not if it really exists (“The Worst Security Risk in U.S. History”; Atlantic; July 19, 2018). Max Boot criticizes more harshly that Trump’s deal with Putin is an act of hostility to the American public, and argues that the media play the vital role to shed light on his intolerable treason (“We just watched a U.S. president acting on behalf of a hostile power”; Washington Post; July 16, 2018). It is extremely deplorable that so many self-styled conservatives are indulged in Trump. According to Fox News, Trump’s job approval rate is 88% among Republicans (Twitter; Fox News; July 24). McFaul and Browder, whom Putin asked Trump to admit Russian officials to investigate, comments that such an overdraft shows how much the Kremlin is imperiled with the Magnitsky Act in their interviews (“Deeply disappointed”: Michael McFaul opens up about threat of being turned over to Putin by Trump”; Salon; July 20, 2018). Whether Trump understands such backgrounds and basics of diplomatic interactions or not, it seems to me that he is obsessed with repealing Obama era achievements and retaliating those who helps the Mueller investigation directly or indirectly.

Above all, it is quite odd that Trump met Putin without accompanying any officials other than the interpreter. It is the common sense of homo sapiens that a droop and fat real estate agent is no match to a fit and muscular former KGB élite. Only Team America can match or outperform Team Russia. Then, why did he want to talk to Putin face-to-face? Richard Haass, President of the Council on Foreign Relations, says this negotiation style comes from is Trump’s businessman experience. He sees personal relationship very important in diplomacy. Rather than bureaucratically arranged meetings, Trump prefers ad hoc sessions so that he can set the agenda more freely with his counterpart. However, a meeting without a formal document of accord is too risky, as it defines no obligations to do something, and eventually leads to mutual distrust over the implementation of the deal. When both sides disagree over something, there is no way to reexamine the content of the deal. Trump is too reckless, and could fall into an easy dupe to crafty autocrats like Putin and Kim Jong-un (“Summing up the Trump Summits”; Project Syndicate; July 25, 2018). Also, further consideration is necessary, as Trump is suspected of the collusion with Russia. Anne Applebaum of the Washington Post and the London School of Economics points out that Russia and Anglo-American rightwing shared information via Cambridge Analytica, whose commitment to the Kremlin’s election interference to boost Trump drew media attention. An expert on Russia and Eastern Europe, she explains how the above mentioned axis of evil was formed through this consulting firm which was closely tied with alt-right Breitbart News. Cambridge Analytica obtained personal data of 87 million Facebook users illegally from Alexandr Kogan of Cambridge University, in order to help the campaign for Trump, the Brexit movement, and even for Senator Ted Cruz. It is suspected that the Russian Internet Research Agency shared election data with the Trump campaign team to target specific voters, in collaboration with Cambridge Analytica. For example, they urged Trump supporters to rise through sending anti-immigration messages, and discouraged black voters from voting through sending distorted information. There is every reason to assume that the Cambridge data helped their illicit manipulation (“Did Putin share stolen election data with Trump?”; Washington Post; July 20, 2018).

The Helsinki summit reveals more problems other than Trump’s loyalty to the nation and the lack of understandings in diplomatic interactions. When the Trump administration was launched, Washington politics watchers said that “adults in the room” would manage the President’s temperament and unpredictability. Since then, Secretary of State Rex Tillerson and National Security Advisor H. R. McMaster were replaced by more loyalist and nationalist Mike Pompeo and John Bolton respectively. Even though they are closer to Trump, they had little influence to stop his poorly prepared and dangerous one-on-one diplomacy with Putin and Kim. In addition, Trump sidelines Secretary of Defense James Mattis these days, and explores more leverage on military affairs by himself (“Trump is reportedly turning on Mattis and taking US military matters into his own hands”; Business Insider; July 25, 2018). Also, Chief of Staff John Kelly is rumored to be in a tense relationship with the President, though he told the media that he would stay in the office until Trump’s term completes (“John Kelly, Trump’s chief of staff, says he will stay in role through 2020”; PBS; July 31. 2018). If cabinet members cannot stop the President, are there any hidden agreements with Putin? That would be extremely dangerous. Donald Trump’s base may not care critical flaws that he has shown after the Helsinki summit, but it is the burden of enlightened people to grill them persistently, and we should not go along with vulgar populism.
Posted by Σ. Alexander at 11:47 PM No comments: