The Corrosion of American Democracy and the World in Disorder 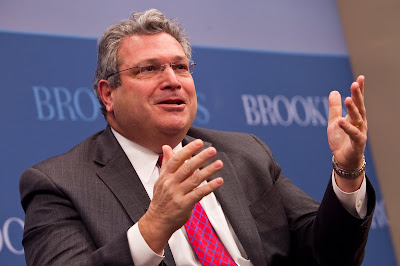 
The gravest threat to the liberal world order is the growing challenges by autocratic nations, while Western democracies lose confidence in their systems and values. Particularly, the decline of American democracy inflicts terrible impacts on the world. We need to understand how democracy is declining today, and to think of the way of overturning this trend. Robert Kagan at the Brookings Institution gives analyses of the underlying challenges posed by authoritarian nations in the policy brief, “The strongmen strike back” which was released this March. Western experts underestimate that traditional autocracies lack universal and coherent ideals like socialism, but he argues that it is authoritarianism itself that poses both ideological and geopolitical challenges to liberal democracies. Meanwhile, the West faces internal challenges of populists, concurrently.

Kagan talks about ideological wars between liberal democracy and authoritarian autocracy throughout history. His historical review gives some clues to understand democracy decline today. In the world before classical liberalism, people were dominated by a rigid hierarchy of feudal society. Peasants were enslaved by landowners for generations, and freedom of thoughts and religion was nonexistent. It was enlightenment liberalism that emancipated individuals from traditional hierarchies and tribalism. In response to the French Revolution, autocratic monarchies like Russia, Prussia, and Austria backlashed liberalism through censorship and imprisonment, which posed a critical threat newly born America. The ideological war between liberalism and authoritarianism was alco geopolitical. Along with such external pressures, I would like to mention that liberal democracy in those days experienced internal challenges of irrationality, though it is based on rationality. In France, Bonapartism and the Bourbon monarchy rose and fell after the Revolution. Quite contradictory, Napoleon III intervened Mexico to enthrone Emperor Maximilian of the Hapsburg, the very symbol of authoritarianism, which ultimately ended in failure. Also, America was in domestic conflict over slavery. Diplomatic isolationism was incompatible with the universal value. This contradiction was resolved when Wilsonian internationalism had emerged.

Despite early day confusions, liberal democracy overcame both external and internal challenges. Kagan tells how autocracies fell by themselves. From the 19th century to early 20th century, authoritarian great powers, notably, the axis powers of both World Wars, were defeated in real wars, not ideological wars. After the fall of traditional authoritarianism, Soviet communism emerged as a formidable opponent. Like liberalism, communism is based on universality and rationality. With Soviet power and successful use of terror and oppression, communism appeared unbreakable. Therefore, Kagan highlights Jeane Kirkpatrick’s classical essay at the height of the Cold War, entitled “Dictatorships and Double Standards” (Commentary; November 1, 1979), in which she said that the West support traditional autocracies to contain totalitarian communism, because she thought that the former regime could be transformed into a liberal democracy, while the latter regime was irreversible. But actually, as Kagan argues, communism lost legitimacy when Soviet leaders failed to achieve material prosperity over the West. However, traditional authoritarianism has reemerged as the threat to liberalism in the post-Communist era. According to Kagan, Russia and China have invigorated authoritarian regimes successfully by the end of the 2000s, through the following way. In Russia, President Vladimir Putin successfully appeals for the “Asiatic” character of his country against the West, through restoring czarist tradition of the Orthodox Church and denying progressive ideas over LGBTQ and gender equality, while China has transformed from a Maoist into a state capitalist nation. That has strengthened the position of Third World autocracies against Western pressure over human rights and transparent governance. The global backlash of authoritarianism comes from the ambivalent nature of human beings. He says that we crave for freedom on one hand, but we depend on strongmen when we feel our families and nations are insecure. When external challenges are so formidable, can liberal democracies maintain supremacy? 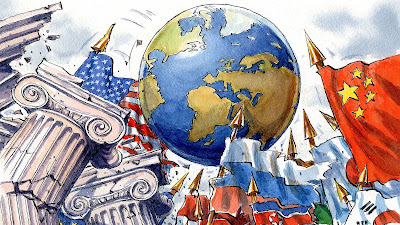 Along with external challenges, Kagan mentions internal challenges that Western democracies face today. In the ideological war, this aspect is more critical than in hard power geopolitical rivalries. Under the name of illiberalism, Hungarian Prime Minister Victor Orbán advocates the supremacy of white Christian traditions over non-white, non-Christian, and urban cosmopolitan values. Far right populism has risen throughout Europe and North America, and in 2018, influential Israeli intellectual Yoram Hazony provided a theoretical platform in his book, “The Virtue of Nationalism,” to urge unified resistance against universal liberalism. The Trump phenomenon in the United States comes from such tribalism. Some conservatives even cast doubt on universal natural rights, and argue that America be exclusively founded on Anglo Saxon Protestant tradition. Quite importantly, Kagan comments that the ripple effect of Western nationalist spreads to non-white and non-Christian nations like Hindu nationalism in India and Islamism in Turkey. From this point of view, I think Vice Prime Minister Taro Aso’s comment, when Trump visited Japan to meet Emperor Naruhito and Prime Minister Shinzo Abe, was extremely deplorable, because he boasted Japan’s close relationship with Trump’s America was an envy of the world (“Nations around the World envy Japan’s Rise of Global Standings”; Sankei Shimbun; May 26, 2019). It sounds arrogant, because he is too poorly aware of global concerns with democracy decline, and furthermore, his remark is a sheer insult to other free nations and bipartisan American foreign policy establishment. I do not know whether Aso regrets his arrogance after Trump stressed his election argument in 2016 that Japan exploits the alliance with the United States (“Abe says Trump has been dissatisfied with the US-Japanese alliance from the beginning”: Jiji Press; July 3, 2019).

Kagan presents further analyses of American democracy today. He articulates that debates on American foreign policy are correlated to American identity. The backlash of isolationism had blown up after the Wilson era. White nationalism, anti-immigration, and protectionism rose, as people increasingly grew obsessed with Anglo Saxon and Protestant heritage, and more antagonistic to the liberal enlightenment essence of the American national foundation. Today, such nationalist conservatives resonate with anti-American leaders, notably Vladimir Putin, who argues that the Euro-Atlantic nations restore the basis of Western civilization like their Christian values and moral traditions, and shed universal values of liberalism. Quite interestingly, Kagan mentions a conservative thinker Christopher Caldwell, who argues that the Russian leader is a “hero to populist conservatives around the world”, because he refuses to submit to the U.S.-dominated liberal world order. From this point of view, America First is too paradoxical. More problematically, mainstream center-right parties are overtaken by anti-liberal democracy extremists as Marc Plattner of the National Endowment for Democracy argues. No wonder why mainstream conservative legislators are yielding to the alt-right, one by one. We have to remember that Kagan was deeply associated with the Republican Party before he joined the Clinton team for the 2016 election. Therefore, his analyses of the transition of conservatism are a critical warning to us. Furthermore, I would like to mention the fallacy of conservative obsession with Christian identity. America has no Middle Age history, and assumes herself free from Old World feudalism. But an idea of a Christendom is completely pre-modern. Such devolutionary ideology shall never make the nation great, but simply less civilized and backward.

Along with devolutionary conservatives, Kagan points out that liberalism today is harshly hit by the left. Quite a few Conservatives today believe in Hazony’s argument that democracy comes from nationalism, not liberalism, as shown in Secretary of State Mike Pompeo's address at the German Marshall Fund in Brussels last December ("Tilting at Straw Men: Secretary Pompeo's Ridiculous Brussels Speech"; Council on Foreign Affairs; December 4, 2018). Trump’s ambassador to Germany Richard Grenell even resonates with Putin to empower nationalists in Europe. Meanwhile, progressives attack liberal capitalism and American imperialism, rather than resisting anti-American autocracies. During the Cold War, conservatives and anti-communist liberals worked together to edge out such far left. But today, there is no coalition against authoritarianism, while autocracies are not so monolithic as the communist alliance was. However, Kagan argues that the distinction of liberal and illiberal nations is much clearer than commonly thought, as the former respects the natural right, but the latter does not. Meanwhile, it seems to me that liberal nations are preoccupied with geopolitics so much that their strategies against autocracies are not well coordinated. Europe focuses on Russia, Japan does on China, and the United States is falling into more fortress isolationism. Domestic politics and alliance disunity among liberal democracies can destabilize the world furthermore.

The liberal world order prevents provocative behavior by autocrats for fear of American pressure. The United States is expected to act beyond an offshore balancer. With the absence of American leadership today, I would like to mention problems that democratic allies like Europe and Japan are facing. Currently, Brexit is shaking Europe. Though the Franco-German axis is supposed to be the anchor of European integration, according to “Macron Diplomat: A New French Foreign Policy?” by the IFRI (Institut français des relations internationals) in April last year, France does not necessarily trust pacifist Germany, regarding European defense. An independent Europe is so difficult to accomplish. Meanwhile, Japan is supposed to be relatively on good terms with Trump’s America, through the channel of Vice President Mike Pence, who comes from Indiana that accommodates numerous Japanese businesses. However, Pence defended Trump’s America First at the meeting with Former Vice President Dick Cheney, which was hosted by the American Enterprise Institute (“Former vice president Cheney challenges Pence at private retreat, compares Trump’s foreign policy to Obama’s approach”; Washington Post; March 1, 2019). Symbolically, he did not stop Trump from blaming Japan over trade (“Trump takes dig at Japan for ‘substantial’ trade advantage and calls for more investment in US”; CNBC News; May 25, 2019) and the defense burden (“Trump muses privately about ending 'unfair' postwar U.S.-Japan defense pact”; Japan Times; June 25, 2019). Unlike Europe, Japan does not necessarily share national security priorities with Asian neighbors, particularly over China. Political turmoil in America makes the world increasingly destabilized.