How should America restore trust from the World? 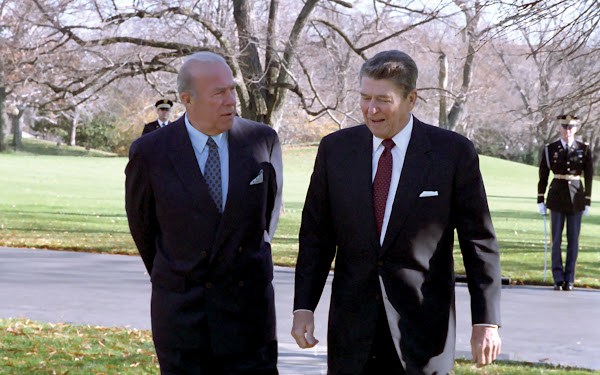 The presidential election this November resulted in the loss of Donald Trump, who advocated America First. Though foreign policy was not a top issue for voters in general, his illiberal, zero sum and deal-oriented isolationism was flatly rejected. However, the victory of centrist Joseph Biden is just the beginning to reinvigorate American leadership in the world.Prior to the election, former Secretary of State George Shultz in the Reagan era showed a guideline to nurture trust to US foreign policy from the global community. Most importantly, Shultz explores the meaning of trust in diplomacy through comparing the Reagan-Gorbachev interactions with myopic zero sum diplomacy today (“On Trust”; Foreign Service Journal; November 2020). He does not blame specific president, but the Washington Post understands his article implicit criticism to the Trump administration.

To begin with, Shultz makes a clear distinction between personal friendship and intergovernmental relations, regarding the trust. In interstate relations, trust is beyond honesty, and it arises from the will of commitment to implement the agreement. He recalls the day when the Reagan administration found that Soviet Chairman Mikhail Gorbachev shared common concerns with nuclear weapons, and he is trustworthy to undertake the common goal to implement the mutual agreement. The Washington Post editorial call an attention to “After nearly four years of an administration that seems to have assumed that American relations with the rest of the world is a zero-sum game and that the game is based largely on the personal relations between national leaders, distrust abounds internationally” in his article (“George Shultz, elder statesman, laments distrust of U.S. abroad under Trump administration”; Washington Post; October 31, 2020), because that has limited the capability of the government to implement foreign policy, since decision making process has become increasingly incoherent. The president's sporadic tweets worsened it furthermore.

In view of the transition of international systems due to new challenges of economics, technology, and pandemics, Shultz argues that the United States needs skillful diplomacy and visionary leadership to stay influential to make a “free and open” world. He mentions furthermore, that the United States needs strategic thinking to facilitate to shape the course of history in line with her values and interests. However, current America relies on military intimidation rather than dedicated diplomatic efforts, which provokes anti-American sentiment globally, while the Cold War II against China and Russia is nearing.

How is Joseph Biden going to rebuild trust from the world? Though the global public is frustrated with Trumpism, they are still examining whether Biden’s foreign policy priorities are compatible with their critical interests. Unlike Europeans, Asians take impending threats of China more seriously than climate change, democracy, human rights, etc. Let’s review Biden’s vision of the world spoken by himself (“Why America Must Lead Again”; Foreign Affairs; March/April, 2020). At the beginning of the essay, he tells ambitiously to restore American leadership through overthrowing Trumpian isolationism, thereby checking challengers such as China and Russia. The article gives an impression to readers that Biden prioritizes global issues of civic wellness in his foreign policy, such as global warming, mass migration, pandemics, and so forth. Also, he reconfirms that democracy promotion is the keystone of US foreign policy, which Trump sidelined so scornfully. This would be helpful to rebuild trust between the United States and the global community, notably with European allies.

However, those lofty agendas are “luxuries” for many of Asian and Gulf Arab nations, as they are on the front line of savage geopolitical confrontations against China and Iran respectively. Biden’s multilateralism and international cooperation sounds conciliatory to their enemies, vis-à-vis, Trump’s reality show like tough posture, even though John Bolton criticizes it harshly. Also, there is still a concern that the United States will be continually preoccupied with domestic affairs, even though Biden upholds American leadership. Actually, he gives high priority to rebuild democracy at home. But it is too simplistic to take it domestically-oriented, because autocratic rivals make use of the political divide in the United States to erode democratic ideals in the world. Notably, Russian President Vladimir Putin disinforms the Western public and sponsors far right movements in the West, in order to discredit Western liberalism and weaken the trans-Atlantic alliance. Regarding his “foreign policy for the middle class”, it is intended to defend the American quality of life from China, through uncompromising rivalries in the economy and technology. Therefore, it is premature to equate Biden’s foreign policy with Obama’s dovish “Nation building at home”.

For further understanding of Biden’s foreign policy, let’s see an article by his Secretary of State nominee Anthony Blinken and Robert Kagan a year before the election, in which they jointly argued that Trump’s America First had ruined Foreign Service efforts for preventive diplomacy and deterrence (“‘America First’ is only making the world worse. Here’s a better approach.”; Washington Post; January 2, 2019). The American Foreign Service has been preventing wars between regional powers such as India and Pakistan, Israel and the Arab states, China and Japan, and so forth. Contrary to prevention and deterrence, Trump has triggered geopolitical competition among great powers furthermore, through recognizing the spheres of influence of strategic challengers, notably as shown in Russian annexation of Crimea. As both experts mention, American voters should know, “properly empowered, U.S. diplomacy can save trillions of dollars and many thousands of lives that would otherwise be spent responding to crises that explode because we ignored problems while they were still manageable.” The diplomacy that Blinken and Kagan advocate would help America restore trust from the global public.

Finally, we must bear in mind that the trust between the United States and the global community, both friends and foes, is mutual. Former NATO Secretary General Anders Fough Rasmussen speaks from a European perspective that the United States needs to reassure her engagement with the democratic world, while European allies should be more proactive to take responsibilities for global security, so as not to provoke isolationist mindsets of victimhood among American voters of the right and the left (“A New Way to Lead the Free World”; Wall Street Journal; December 15, 2020). The notion of trust that Shultz upholds in his article is vital for both America and her allies around the world. Also, we should bear in mind that Trump has shattered mutual trust with America’s best partners with his vulgar words and phrases. Deplorably, Trump Republicans belittle this just a matter of his style. They are appallingly ignorant, as opposed to a Reagan Republican Shultz.