After the Midterm Election, Russia and the Far Right Are Crucial

So many people evaluate the results of the last US midterm election in so many ways. Trump’s Republican won in the Senate, but lost in the House. It is quite difficult to tell which side actually won, with all things considered. Also, it is too premature to foretell political trends in the 2020 presidential election, simply based on the results. The media applaud the rise of female and minority seats in both Houses. But for the immediate issue is, how will the Congress check Trumpism that scares innumerable people in the United States and abroad. I would like to talk about hope and despair of post-election American politics from the following key words, that is, policy professionalism, human rights, Russia, and the far right. For this objective, I would like to focus on noteworthy winners and losers in this election, rather than arithmetic analysis of partisan rivalry.

On the hopeful side, I would like to mention Democrat Congressman Tom Malinowski of New Jersey’s 7th district, who was the Assistant Secretary of State for Democracy, Human Rights, and Labor. Before joining the Department of State, he was a Rhodes Scholar at Oxford, and worked for Senator Daniel Patrick Moynihan and some think tanks including the Ford Foundation. He served both the Clinton and the Obama administrations as a diplomat. During the Bush era, he was the Washington Director for Human Rights Watch, where he campaigned for democratic reforms in Myanmar, women’s rights in Taliban-ruled Afghanistan, and civilian protection in Syria. As his brilliant career shows, he is a renowned policy making professional on human rights. Though he is deeply associated with the Democratic Party, he received bipartisan congratulations from former senior diplomats when he was elected, such as Bush’s Under Secretary of State R. Nicholas Burns and Obama’s UN Ambassador Samantha Powers.

Human rights have been a core agenda in US foreign policy, but current President Donald Trump is quite dismissive of this issue, as typically seen his lukewarm attitude in the Khashoggi case by Saudi Arabia. From the beginning, his appointment of Rex Tillerson to the Secretary of State was controversial. Though Tillerson was regarded as one of the adults of the team to mitigate Trump’s America First, his credential was severely questioned at the Senate hearing, as it turned out that he had little interest and insufficient knowledge in critical human rights issues such as women’s rights in Saudi Arabia, R2P in Syria, and so forth.

Remarkably, Malinowski is an immigrant from Poland. He moved to the United States at the age of six when his mother married a liberal journalist Blair Clark. Everything of his background is an antithesis of Trump’s barbaric anti-intellectualism, narrow-sighted nationalism, cold-blooded cruelty, and rancid vulgarity. Malinowski may not be a dazzling star like Beto O’Rouke, but his knowledge, experience, and trust from the State Department colleagues will be of great help to rebuild American foreign policy on human rights ever since Trump was inaugurated.

Another hopeful incident is the loss of Republican Congressman Dana Rohrabacher in California’s 48th district. This is not just a single seat, because he is notorious for close ties with Putin’s Russia and European far right including former UKIP leader Nigel Farage, former Polish Defense Minister Antoni Macierewicz, and Hungarian President Viktor Orbán. Among them, Farage and Orbán resonate with Vladimir Putin’s anti-globalism and anti-liberal democracy initiatives to turn Europe into a nationalist and traditionalist sphere, which is completely at odds with the ideal of the EU and NATO. Rohrabacher was pro-Russia from an early stage, and has been sacrificing American national interests to advance his alt-right agenda. During the Russo-Georgian war, he blamed Georgia for provoking Russia. More importantly, he tried to delegitimize the Magnitsky Act at the House hearing, while Putin’s legal advisor Natalia Vesernitskaya met Donald Trump Jr. and Jared Kushner for the FBI suspected collusion at the Trump Tower. Regarding the Russia probe, he even blamed Attorney General Jeff Sessions for not closing Special Counsel Robert Mueller’s investigation. 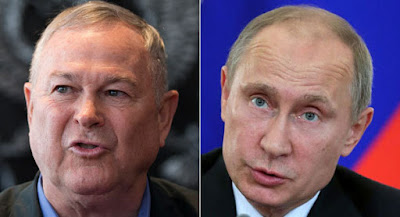 The Axis of the Far Right: Rohrabacher and Putin


Besides Russia, Rohrabacher remarked something questionable for his credential as a US congressman, regarding terrorism and human rights. He praised ISIS for attacking the Iranian majlis, which killed 17 civilians in 2017. That raised bitter criticism from Human Rights Watch and the National Iranian American Council. In addition, Rohrabacher expressed his gratitude for the support from a far right firebrand Charles Johnson, who openly denies the holocaust. As a Congressman, Rohrabacher was a steadfast anti-communist and a notable hawk against America's enemy like China and Iran, throughout his 30 year career. However, his close association with Putin and European far right, and his dismissive attitude to human rights are incompatible with American values, though he assumes himself a Reagan conservative. Actually, he is one of typical Trump Republicans, and that is the vital reason why his defeat in California’s 48th district is so important for the Never Trump side in this election.

On the other hand, not everything is hopeful. A despairing result is the reelection of a white nationalist Congressman Steve King in Iowa’s 4th district ("GOP Rep. Steve King, accused of racism, wins re-election in Iowa"; CNBC News; 7 November, 2018). Like Rohrabacher, King is an alt-right firebrand. This October, his House Republican colleagues led by Speaker Paul Ryan denounced him vehemently, because he endorsed a far right candidate Faith Goldy in the mayoral election of Toronto. She is a Canadian mini-Trump, as she admires American white supremacist Richard Spencer, and featured by neo-Nazi journal, the Daily Stormer ("Rep. Steve King’s endorsement of white nationalist mayoral candidate in Canada draws rebuke from conservative news outlet"; Washington Post; October 18, 2018). King is in close contacts with European far right, and praises Putin generous, simply because he did not murder Gary Kasparov, though the former world chess champion was forced to leave for the United States ("Steve King: Putin Allows Freedom of Dissent Because He Hasn’t Murdered Garry Kasparov in New York Yet"; Alternet; February 5, 2017).

Above all, alt-right influence still remains in the Republican Party and the Congress, though Democrats won in the House. In view of this, William Kristol warns repeatedly that Trump will grow more radical and divisive after the midterm election, and reshuffle his cabinet to appoint more loyalist members. Mentioning Johnathan Last’s article in the Weekly Standard on November 9, Kristol comments that Trump Republicans are Maoist-minded, thus, they are more interested in controlling their own party, rather than strategic rivalry with China or Russia. Though they kept the majority in the Senate, they lost in the House. This does not boost their legislative capability. But according to Last, Trump Republicans are not fighting against liberals, but traditional Republicans. In view of Trump’s word and deeds, his analysis seems to be somewhat plausible. Trump demands personal loyalty to himself from the staff. Also, Trump said he won the midterm election. If this is about intra-party conflicts, it makes sense. Trump Republicans do not care, even if Democrats defeat anti-Trump Republicans, from this point of view.

Last assesses the election results that Republicans have become radical, while Democrats more centrist. Far right populists are strongly associated with Putin’s Russia. They are disdainful to human rights and the rule of law. From this point of view, the focal issue is the Russia probe, and how will Democrats and “sane” Republicans protect Mueller from Trump’s abuse of power. Actually, Trump Republicans are obsessed with the seizure of power so much as Last says that they would find any means to obstruct the investigation, and even to disinform the public as Putin does. Anti-intellectualism among populist extremists would enhance these tendencies. That could erode policy professionalism in the Congress. Since Democrats won in the House, Obama care is no longer the top issue. It is the Russia probe that critically matters, and Trump opponents should defend the due process of investigation by all means.