The Chinese authority arrested five Uyghurs for the bombing at the Tiananmen Square. But are they really responsible? Historically, Xinjiang or East Turkestan is the route to Afghanistan and Pakistan from mainland China. However, see the map of Al Qaeda franchise below. 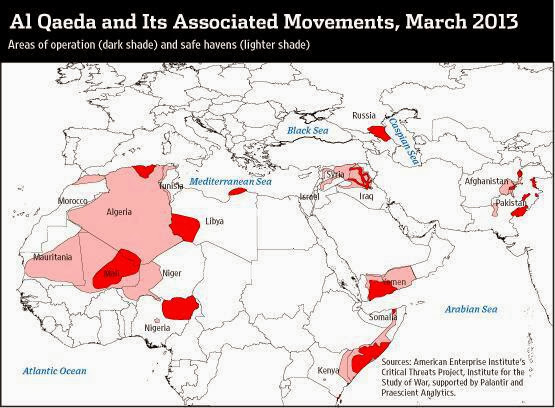 The success of the surge in Iraq in 2008, Al Qaeda was supposed to be defeated. However, the Obama administration’s decision to pull out US troops from Iraq and subsequent Arab Spring helped Al Qaeda resurge and spread in Africa, including the Sahel, Kenya, and Somalia, and also throughout Arab nations. Their strongholds in Afghanistan and Pakistan are still formidable. The Boston bombing was inspired by their affiliates in Chehchnya. But Al Qaeda has not penetrated in Central Asia and the Chinese Xinjiang (“The al Qaeda Franchise Threat”; Wall Street Journal; April 30, 2013).

The Chinese authority says that Uyghur “terrorists” are trained in Syria. Are the suspects related to Syrian war rebels? No information has been provided. Alim Seytoff, Director of the Uyghur Human Rights Project, comments that it is quite unlikely that Uyghur citizens attack such a tightly secured place (“Rights Groups Doubt Uyghur Involvement in Tiananmen Attack”; Diplomat Magazine; October 30, 2013). Rabiya Kadeer, President of the World Uyghur Congress, argues furthermore that China can do anything to manipulate Uyghur “terrorism”, in order to repress independence movements in East Turkestan. On the other hand, Ilham Tohti, China based Uyghur economist, says that Uyghurs have no other measures except violence as Beijing took away all the channels for their self expression (“China suspects Tiananmen crash a suicide attack, sources say”; Reuters News; October 30, 2013).

Is China fixing up terrorism, or is Al Qaeda intruding to Xinjiang? At this stage, it is suspected that the Communist Party manipulates the terror attack.