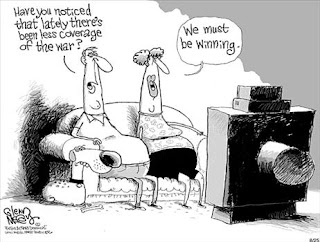 Some reports on Iraq are released these days. NIE report mentions some progress, while GAO report presents pessimistic viewpoints. It is commonly understood that Former Secretary of Defense Donald Rumsfeld is to be blamed for strategic mistakes. But liberal media and lawyers are also responsible for current hardship in Iraq. These agitators must be well aware of negative consequences of their work. As they respond to accidents in Iraq and treatment of prisoners at Guantánamo camp outrageously, terrorists make use of such tumults. For terrorists, particularly jihadists, liberal upheavals are endowments from Allah to humiliate America by all means.

One of my blog friends Mike Ross wrote some interesting posts on his blog, entitled “Conservatism”, which is published in Japanese. He is a diehard conservative American, and holding a Japanese passport as he has been living in Japan for decades.

One of his posts is “A Caricature of the Iraq War”, in which he comments briefly about a cartoon in Town Hall. See the picture above. As he mentions in this post, the media are too happy to find negative stories in Iraq, in order to blame America. In the other post on the same August 27, entitled “The War on Terror Is beyond Judicial Authority”, Mike criticizes vehemently that liberals are wrong to insist that terrorist prisoners at Guantánamo must be treated as civil criminals such as murderers and robbers. He is right. If terrorists were treated as civil criminals and easily released from the prison through normal legal procedure, they would repeat mass murder and destruction.

The threat of rogue leaders and terrorists is so grave that they must be treated completely different from good citizens like us. When I appeared in an NHK TV forum about Japanese pacifist constitution on August 15, Professor Setsu Kobayashi of Keio University and an antiwar activist Shigemitsu Hisamatsu blamed US attack on Iraq by quoting international law. I argued against them based on the logic of Hobbesian and Kantian world by Robert Kagan. However, the moderator did not give me enough opportunity to refute their egg-headed legalism.

Certainly, Setsu Kobayashi is a leading expert on Japanese constitution. But I have to mention an important point. However finesse those liberals’ arguments may be, they miss the vital point. Law protects our freedom, but not terrorists’ and rogues’. It is extremely regrettable that liberals like Professor Kobayashi put the cart before the horse. Japanese SF hero Kamen Rider fights against Shocker, an army of super villains, in order to protect freedom of human beings. But liberal extremist lawyers like Setsu Kobayashi fight against human beings, in order to protect Shocker’s freedom.

Why the media and lawyers are so happy to shame American hegemony in the world? Apparently, the world is better off when America defeats rogues and terrorists unabashedly. Europeans and Japanese have common interests with Americans. As I mentioned in a previous post, “Is Middle East Democratization a Neocon Plot?”, Europeans are tackling for Middle East reform. Japanese such as Former Foreign Minister Taro Aso, also advocate democratization throughout East Asia. Just as Josef Joffe who is an adjunct professor at Stanford University points out, victory in Iraq is the key to success in the War on Terror and global democratization (“If Iraq Falls”, Wall Street Journal、August 27). Despite this, liberal media and lawyers are extremely joyous when they find policy errors in Iraq and the War on Terror. Moreover, they defend “human rights” of terrorists at Guantánamo.

Regarding media response to the Iraq War, I would like to mention some articles written by experts at the American Enterprise Institute. In a pervious post, entitled “Democrats Need to Act beyond Defeatism on Iraq”, I quoted essays by Michael Barone and Thomas Donnelly. Both resident scholars point out that party politics plays an important role in the Iraq debate. In addition, I have to mention another article by Thomas Donnelley and an article by Frederick Kagan, in order to understand how media portrayal of the war misleads the public. In an article “NBC's Body Armor Embarrassment” in the Daily Standard on June 20, Donnelly concludes as the following.

The press and the leadership of the Democratic Party, in the throes of an extended Vietnam flashback, have decided the war is lost. Senate Majority Leader Harry Reid even thinks he knows what's going on in Baghdad better than does Gen. David Petraeus, the commander on the scene. But the media and the Democrats still fear that their defeatist attitudes may alienate people in uniform, or Americans more broadly. Thus the need to cast soldiers as victims. The only victim in the body army story, though, is the truth.

Frederick Kagan contributed “Misunderstanding the Surge” to the Daily Standard on June 5, in which points out misreport by the New York Times due to poor understanding of situation in Iraq. According to Kagan, the New York Times failed to discern former chief commander General George Casey’s strategy from current chief commander General David Petraeus’ strategy when their staff published an article “Surge Has Failed” on June 4. General Casey’s plan was based on 2003 assumption, which had been focusing on transitioning security responsibility to the Iraqi forces. In order to curb sectarian conflicts in Iraq, the Bush administration decided to appoint new commander General Petraeus, and change the strategy. The New York Times evaluated the consequence of surge based on former commander’s plan. In fact, the surge has stated when new commander reviewed trials and errors of his predecessor to execute new strategy announced on January 10 by President George W. Bush. Kagan said it is necessary to wait and see the consequence of surge by September, and strategists such as Michael O’Hanlon and Kenneth Pollack of the Brookings Institution admit some progress in the war in August.

I have talked about the media, and I need to explore further sources to denounce arrogant and egg headed legalists. Why are these liberal extremist elitists so pleased to blame the White House? Frederick Kagan explains such psychology in his conclusion.

There will be many difficult months to come, as our enemies attempt not only to make the strategy fail, but to convince Americans and Iraqis that it will fail. ……. The New York Times wrongly judges the current commanders by their predecessors' expectations. And it wrongly presents their efforts to solve legacy problems as evidence that the current effort has failed. It may be emotionally easier for some simply to convince themselves that the U.S. has already failed in Iraq. But success remains possible if we have the will to try to achieve it.

Any kind of extralegal activities are legitimate in both wars because the nature of enemies is completely different from those in traditional wars. It is utterly wrong to blame this. Liberal extremist Brahmins, stop helping our enemies! They are overjoyed when Brahmins distort our public opinion. Is there any ways to keep these nuisances silent? They are much more to be blamed than Donald Rumsfeld!
Posted by Σ. Alexander at 10:19 PM